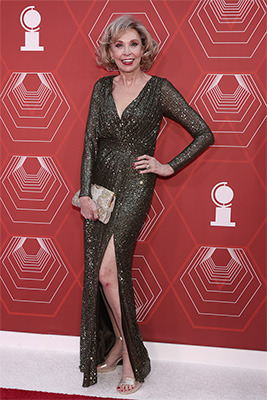 Derrick Davis (The Phantom of the Opera, The Lion King, Carousel, Film's A Christmas Story, Can a Song Save Your Life), Arielle Jacobs (Aladdin, Wicked, Between the Lines, and In the Heights) and Telly Leung (Aladdin, Rent, TV's Glee, and Allegiance) will join the star-studded cast featuring previously announced performers:

"Broadway Belts for PFF! has become one of Broadway's hottest tickets for both in-person and virtual attendees," said Julie Halston, winner of the 2020 Isabelle Stevenson Tony Award. "Our celebrity talent is proud to help the PFF drive research and support patients living with this devastating lung disease."

A highlight of the evening will include recognition of Tom Viola, Executive Director of Broadway Cares/Equity Fights AIDS (BC/EFA), with the 2022 Ralph Howard Legacy Award. Viola, who has supported Broadway Belts for PFF! since its inception in 2010, has contributed significantly to health and family service organizations nationwide. The pulmonary fibrosis community is grateful for the opportunity to honor his generosity and support of the PFF. The Ralph Howard Legacy Award is named for anchorman Ralph Howard, the late husband of hostess Julie Halston. Howard was a committed advocate of mentorship and community involvement, and he provided unwavering support for Broadway Belts for PFF!  His legacy lives on through this annual award.

Broadway Belts for PFF! attendees will enjoy a cocktail reception, superb cuisine, and extraordinary performances at New York City's Edison Ballroom. Those who attend virtually will experience a fully interactive program with a mixology class before the live show. In-person and virtual tickets for Broadway Belts for PFF! are available now at broadwaybeltsforpff.org.

"Thanks to Julie Halston and her stellar production and talent team, Broadway Belts for PFF! is a celebration like no other" said William T. Schmidt, President and CEO of the PFF. "This event generates not only crucial funding but also much-needed joy for everyone in our community."

Broadway Belts for PFF! is directed by Carl Andress (The Confession of Lily Dare, The Divine Sister) with Christopher McGovern (Cagney) as Musical Director. The benefit is produced for the twelfth straight year by D. Michael Dvorchak, Sue Frost (Memphis, Come From Away), Julie Halston, and Ed Windels.

Pulmonary fibrosis and interstitial lung disease are characterized by varied amounts of inflammation and scarring that damage the ability of the lung to transfer vital oxygen into the blood. The prevalence of PF is on the rise with more than 50,000 new cases diagnosed annually. There is no known cure.

To purchase tickets and for more information about Broadway Belts for PFF!, visit broadwaybeltsforpff.org. In-person attendees can review our COVID-19 policies and procedures here.

About the Pulmonary Fibrosis Foundation

The mission of the Pulmonary Fibrosis Foundation is to accelerate the development of new treatments and ultimately a cure for pulmonary fibrosis. Until this goal is achieved, the PFF is committed to advancing improved care of patients with PF and providing unequaled support and education resources for patients, caregivers, family members, and health care providers. The PFF has a three-star rating from Charity Navigator and is an accredited charity by the Better Business Bureau (BBB) Wise Giving Alliance. The Foundation has met all of the requirements of the National Health Council Standards of Excellence Certification Program® and has earned the Guidestar Platinum Seal of Transparency. For more information, visit pulmonaryfibrosis.org or call 844.TalkPFF (844.825.5733).