Join us for ILD Day on September 14!

Interstitial Lung Disease (ILD) is the umbrella term used for a large group of diseases characterized by inflammation and/or scarring in the lungs. The inflammation and scarring can injure the lungs, making it difficult to breathe and get oxygen to the bloodstream. Shortness of breath is a common symptom of ILD, along with dry persistent cough, fatigue and weakness, chest discomfort, "clubbing" of the fingertips, loss of appetite and unexplained weight loss.

Register for our webinar! 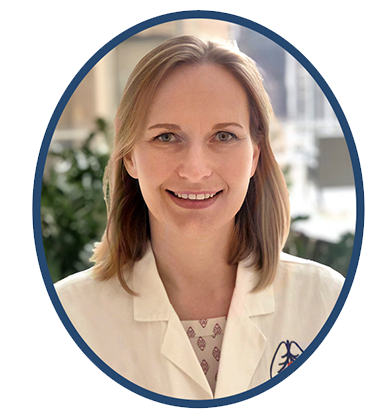 Dr. Anna Podolanczuk is a nationally and internationally recognized expert in interstitial lung disease. She received her undergraduate degree in Neuroscience from Brown University. She earned her MD from NYU School of Medicine. She completed residency in Internal Medicine and fellowship in Pulmonary and Critical Care Medicine at Columbia University. She received additional training in advanced pulmonary diseases at Columbia University. She also earned a Masters of Science in Patient-Oriented Research from Columbia’s Mailman School of Public Health, with a focus on epidemiology and biostatistics.

Shortness of breath is a common symptom of all ILDs. Other signs and symptoms include:

Causes of ILD include the use of certain medications, radiation to the chest, autoimmune diseases, as well as certain environmental and occupational exposures. Some ILDs do not have a known cause and are referred to as 'idiopathic.'

Some ILDs do not have a known cause. Idiopathic pulmonary fibrosis (IPF) is one of the most common forms of ILD and has no known cause. IPF occurs primarily in older adults and is limited to the lungs. IPF is a progressive disease, which means that the lung fibrosis gets worse over time. The progression is variable, with some people experiencing slower but steady progression and others developing more rapidly worsening disease.

Patients with some inflammatory and connective tissue diseases are at a higher risk for ILD. These conditions include rheumatoid arthritis, systemic scleroderma, myositis, including dermatomyositis and polymyositis (DM and PM), sarcoidosis, and Sjögren's.

View the drop-down list below for additional information on these diseases that can cause ILD.

Myositis: Myositis refers to inflammation of the muscles. Infection, injury, and autoimmune diseases can all cause myositis. Idiopathic inflammatory myopathies, such as polymyositis and dermatomyositis, are autoimmune in nature. Polymyositis (PM) causes muscle weakness, usually in the muscles closest to the trunk of your body. Dermatomyositis (DM) causes muscle weakness, plus skin problems such as rash.

Rheumatoid Arthritis (RA): RA is an inflammatory arthritis in which joints are inflamed resulting in swelling, pain and possible destruction of joints. It is also considered an autoimmune disease and attacks connective tissues in the patient’s body, and can attack other organs, including the lungs. ILD is a frequent extraarticular manifestation of RA.

Scleroderma: Scleroderma is a rare disease that hardens and tightens the skin and connective tissues. It affects women often more than men and most commonly occurs between the ages of 30 and 50. There are two main categories of scleroderma: localized and systemic. Localized scleroderma typically affects only the skin, but in rare cases may extend to the underlying muscle. Systemic scleroderma (sometimes called systemic sclerosis or SSc) is an autoimmune disease that can involve many body systems: the skin, blood vessels, heart, lungs, kidneys, or other major organs.

Sjögren's: Sjögren’s is a chronic inflammatory disorder, and it is considered an autoimmune disease. Sjögren’s can affect a patient's airways and is a risk factor for ILD.

Avoidance of the triggering environmental substance, if known, is a part of management, but if the condition goes untreated or is not well controlled over time, the chronic inflammation can cause pulmonary fibrosis.
Sarcoidosis

Sarcoidosis: Sarcoidosis is an inflammatory disease that can affect many organs of the body, most commonly the lungs. The inflammation causes the formation of nodules, called granulomas, in the affected organs. The cause of sarcoidosis is unknown, but it seems to have both a genetic and an environmental component. People between 20 to 40 years of age are more likely to develop sarcoidosis than others.